This technical guide delves into the Encrypted Communications IronDefense analytics and organizes them based on Cyber Kill Chain.

Attackers who do not want to be quickly detected know they must hide in encrypted traffic. To avoid detection, they attempt to obfuscate and camouflage communications over the TLS (Top Layer Security) protocol, which facilitates encryption and enhances data security. Although the content of TLS messages are encrypted, the handshake is unencrypted. IronDefense uses data from the handshake to evaluate the host for Indicators of Compromise (IoC) and create alerts. This enhances IronNet's suite of analytics that are designed to detect suspicious behavior across all phases of the Cyber Kill Chain. IronNet’s analytics for encrypted communications work together to identify anomalies in network traffic and target behaviors that pose threats to the integrity, availability, and confidentiality of the system. The analytics are:

Some of IronNet’s analytics (Phishing, Domain Analysis, Consistent Beaconing, Extreme Rates, and Unusual Day) and the behaviors they detect are agnostic to specific protocols. Regardless of TLS, an attacker will often attempt to gain credentials through a phishing scam, shift domains to obfuscate C2 servers, deliver beacons to and from a C2 server to send and receive instructions, and exfiltrate large amounts of data from the network. IronNet's analytics for these behaviors analyze generic properties of network traffic such as payload size, session timing, and destination domain and, therefore, do not require decrypting what is inside of the payload. Through this agnostic approach, IronNet is able to analyze many types of traffic (DNS, HTTP) while also utilizing unencrypted features from the TLS handshake when available.

Other analytics (Encrypted Communications TLS, TLS Invalid Certificate Chain, TOR Traffic, and Novel JA3) are designed exclusively for the TLS protocol. These analytics identify cases where an attacker utilizes TLS to create a command and control channel, create invalid certificates to attempt to bypass authentication, or hide behind anonymous proxy servers to protect their identities. By parsing the TLS protocol, IronNet can pull Indicators of Compromise (IoC) and other unencrypted features out of the TLS handshake. These features are then used in machine learning and other model-based approaches to classify the traffic by extracting a JA3 hash and validating if the traffic is new to the network, examining the SNI (Server Name Indication), and identifying misconfigurations in the handshake where attackers sometimes leave a footprint. 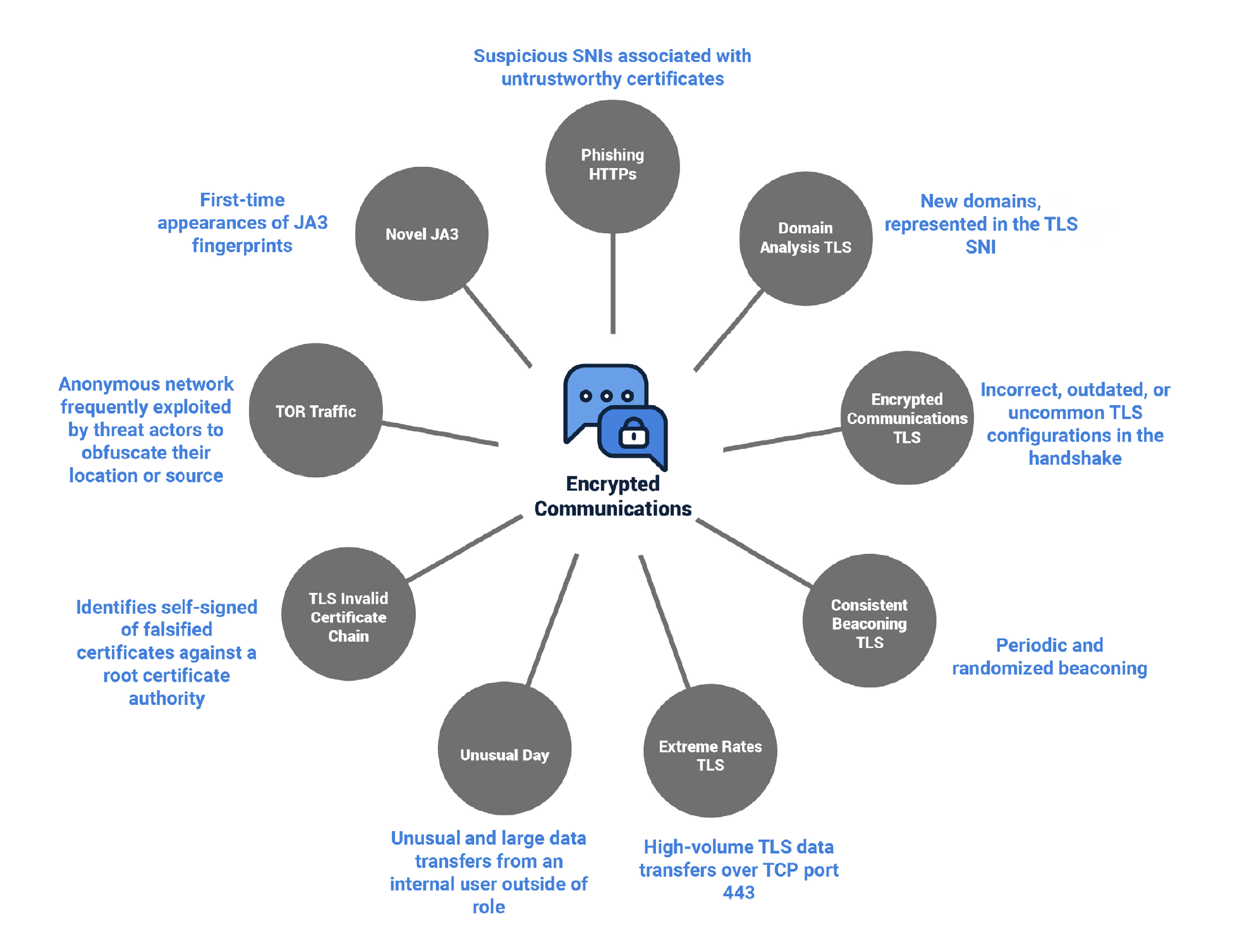 Phishing HTTPS detects when a user visits a domain that may be associated with phishing activity over HTTPS. The analytic examines all SSL (Secure Sockets Layer)/TLS (Transport Layer Security) encrypted communications from internal devices to external domains. The analytic reviews both the SNI (Server Name Indication) and the certificate of the destination. The SNI indicates the hostname of the server being contacted by the web browser at the beginning of the TLS handshake process. An IronDefense alert is created when an internal entity initiates a communication with an external server with a suspicious SNI or certificate.

The Domain Analysis analytics alert on suspicious domains that have yet to be seen in the network's environment in the last 30 days. The analytic assesses outgoing communications from an internal host to a new or unusual domain. The communication may be the result of a malware calling back to a domain for instructions or an employee who inadvertently visited a malicious web site. If the domain has not been detected in the past 30 days of traffic, the analytic examines fields within the header, such as the path, referer, and user agent, for unusual activity.

When the analytics flag the activity, IronDefense applies Expert System rules that automate the process of determining if the domain is on an IronDefense or open source block list. IronDefense validates domains against the Majestic Top Million and Cisco Umbrella to ensure customer networks are not communicating with bad domains. IronDefense is also able to determine if the communication is an isolated event, originating from a single user, which would be suspicious, or from many users, indicating a possible scheduled service. After Expert System validates the analytic’s findings, an alert is created and shared with analysts.

The Encrypted Communications analytic is designed to detect suspicious activity by evaluating features consistent with malware communications passed through encrypted channels, without the privacy and security costs of traffic decryption. The adoption of encrypted communication methods presents new challenges for network security. As the amount of overall encrypted traffic increases globally, threat actors are using encryption to hide malware in covert communications.

Malware uses beaconing to communicate back to the attacker in order to receive instructions or report successful implantation. While beaconing activity often executes over regular and fixed intervals, attackers may randomize the behavior by adding jitter to the beacon timing to obfuscate the activity and avoid detection. The Consistent Beaconing analytic detects ongoing patterns of both fixed-interval and randomized-timing beacon activity and places a high emphasis on the most persistent and continuous beaconing signals.

Beaconing is not a technique that is exclusive to malware. Many enterprise software applications use beaconing for operations such as software updates or data retrieval. To increase the efficacy of the alerts, analysts can safe list benign traffic.

The Extreme Rates TLS analytic detects high-volume TLS data transfers over TCP port 443. The analytic compares entities within a peer group and baselines the average amount of outbound traffic across the group. The analytic monitors the peer groups for significant increases in the number of bytes. When the analytic detects such an increase, an alert is created. While the kill-chain attack methodology remains the same as unencrypted attacks, the true underlying activities are more difficult to identify because the content of the data is encrypted.

The Unusual Day analytic detects when an entity is sending out more traffic than established baseline behavior patterns. IronDefense accumulates patterns of typical network behavior for each host. When the host’s network activity deviates from baseline activity by uploading unusual amounts of data, contacting new resources, or communicating with new devices outside the host’s expected role, IronDefense creates an event and fires an alert for Unusual Day. The analyst must determine if the activity is legitimate, normal browsing or suspicious behavior such as transferring unauthorized data outside of the network.

TOR (The Onion Router) is an anonymity network frequently exploited by attackers. To disguise the source of malicious traffic, adversaries will leverage TOR to appear to come from any of a number of public or private exit nodes. The TOR Traffic analytic identifies the traffic based on behavioral characteristics of the TLS connection even when the attacker is using a private exit node.

The Novel JA3 analytic searches TLS traffic for first-time appearances of JA3 fingerprints. Each novel fingerprint represents a new configuration of the client side of a TLS handshake, which can be associated with applications that are new to the network and in some cases are malicious exploits. Network owners typically enforce policies constraining the set of applications admissible on the network. This means first-time application usage is either associated with a newly approved application or is indicative of a user violating security policies.

Novel JA3 constructs a historical baseline of JA3 fingerprints appearing on the network by recording the complete set of distinct fingerprints that appear each day. In addition, the analytic searches for the appearance of any fingerprints that have never appeared prior in the historical data and publishes events for each of these.

After this initial detection, the analytic further monitors novel fingerprints for a period of 5 days to measure their popularity in terms of the distinct count of source entities, destination entities, and server name indications (SNI) associated with the use of the fingerprint. Fingerprints that are rarely used, as indicated by low values for the aforementioned counts, receive an additional event.

Most analytics for encrypted communications run over raw data collected by the network TAP and converted into IronFlows. The Extreme Rates and Unusual Day analytics are applied to log data as well, as shown in the chart below.